My first encounter with motorbikes was more out of necessity than a desire for getting a bike. I was sixteen years of age and had just started work at GKN in Smethwick in the IT department. As I was going to be on shift I needed a way to get around, I asked around and one of my friends at the time said he new of someone who was selling a bike as he was emigrating.

I went to see the bike a gleaming white, green & black KH250 B4 (EFD 121T), being sold by Mr Ada Deeming. 30 minutes later the deal is done and I am off to the bank to get some money to pay for the bike and insure it.

And as they say that’s where it all started…..

I managed to find a couple of old back and white photo’s of the bike on FB where we can see a very young Ada Deeming and friends and a couple of glimpses of the bike. I don’t have any pictures of my own but I had such a great time on the bike and I was hooked. 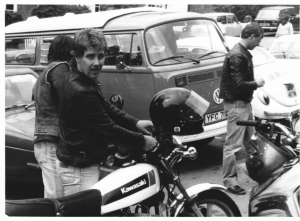 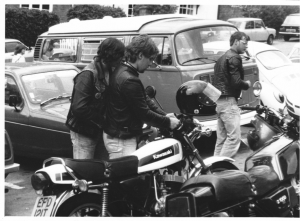 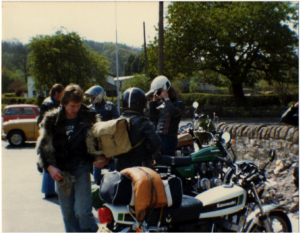 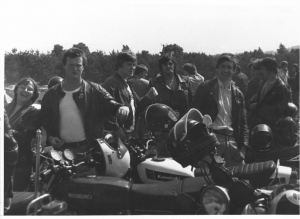 I did a check on the bike on the DVLA website and it shows:

I rode the bike for about 8 months and then decided to take my test. On the morning of the test in Quinton I could not start the bike, the plugs were fouled up. I borrowed by Uncle Ken’s Honda C90 step thru and managed to pass my test at the first time of asking.

I remember the examiner saying “I bet you will go out and buy a bigger bike now you have passed!”…I just smiled and left him to it…..

What he didn’t realise is that I had the KH and a RED z500 waiting for me at home.

So then started the second chapter in my biking life…..